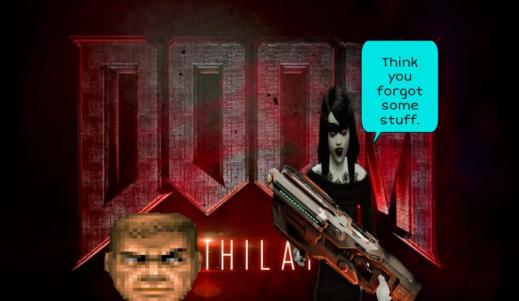 I was looking forward to this. First Doom movie wasn’t bad. Solid action, Sci-Fi horror movie, but wasn’t the Doom we were hoping for. Maybe this time around would be better. Then the first trailer drop and was a little harder to hope, but still there. Then ID, the creators distanced themselves from the project, which was not a good sign, and the movie just kind of came out, without much press behind it or anything. But that was fine, I love B-Movies. Review them here every Sunday. Doom may even thrive in the B Movie genre department, and with the next game being pushed back. This can fill the sorrow till March and oh boy did it fail so hard at that. Normally, try to be positive and give a movie a fair shake, and not run down a bad one to much, but this movie… Let’s do the thing we do here, and I will try to be as impartial as I can be.

This story opens up in a lab, one on Phobos and one on Earth. Testing out what they believe to be teleporters, and their test is successful, but the man comes through as an infected monster. That they manage to lock away. We then jump to the Soldiers, and Lieutenant Joan Dark. Haunted by an old memory, and becomes clear that she is loathed by her team of extremely obnoxious and cliched soldiers. Plus a Doctor who use to date her, because why not. They are being sent to Phobos to act as security because Joan messed up bad on their last assignment and this was their punishment. Meanwhile, back in the lab. Dr. Betroger in an attempt to prove the teleporter can work. Goes through himself and causes an explosion and something bad comes through. Soldiers arrive and notice right away something is wrong and go out to restore power and find out what has happened, and are attacked by Zombie’s of the former scientists. Action and deaths are gruesome and sort of effective. You can see what happens at almost every turn here, but whatever. They find survivors and Dr. Betruger. Who has “no” memory of what happened. They then find out the portal is a gateway to hell. Although Dr. Betruger vehemently denies this. Venture off to their ship, but Daisy, their A.I. has been hacked or taken over, and isn’t about to let anyone leave, and enter the Demons, who actually look great. After a massive fight, survivors are faced with the painful truth that the portals may be their only way out, but Joan and the Doc, know that is what Betruger wants and are not going to do this, but call for help. Betruger knows and uses Joan’s failures to distract them long enough to lock them inside, and goes off to open the Gates, because someone on that side has ordered him to do so, and after more monologging, introduction the worst BFG gun imaginable, and it comes down to Joan and Betruger, and after what would be a sad death of Doc, which was more ways to slow things down when it had to be faster. She gets knocked into hell and I just want it to be over. Fights her way out, painful slow motion exit to Earth. No one listens and end scene of the portal, just before the demons escape to Earth.

This story was so bad, and I don’t even know where to start. I don’t understand the reason behind needing the soldiers, when one was all that was needed. They were cliche, and hearing the one yell, I’m your Ultra Nightmare wasn’t funny the first time, and hurt the second. Nearly turned it off the second time, and made a review on how dumb it was. If it was just to have people around for the demons to kill, could have accomplished that by having more scientist survivors for Joan to find around the complex. The pacing was so bad. They kept stopping to talk about something, and it just slowed things to a stop and all during what should have been the final climax. From stopping st the BFG, for her to have a tear filled breakdown about her being a screw-up, and then a long struggle with the Doc, and then the Demon Overlord had a speech, and then slow motion, because why not.

Feel like, they didn’t quite get the spirit of what Doom is. I mean, there is not much to the game. One person, Doom Slayer, against a massive force of demons. Armed with his wit and cache of weapons at his disposal, but there is actually something there, and that is might. One person digging down deep, and defeating a horde that outnumbers and should overwhelm, but through sheer will of his character; they can’t. That is what makes Doom Slayer memorable. They are the unstoppable force and the slayer is the unmovable object. In this movie, any time Joan starts to get momentum and looking strong. They stop to talk or have her crying and every time they do. They rob her of her internal strength, and no, the cross and faith was not the way to go. Had no place in this movie, cause like I said; needed to come from strength of character. Not an external source.

There were some positives in this movie. The setting was perfect. Attention to small details were on par. From the key cards, medikits on the wall. The holomaps. All ripped from the game. Some of the kills seemed Doomesque. The designs of the demons and imps were beautiful. Pretty decent carnage candy.

Do want to talk about the character of Joan Dark, and the actress who played her, Amy Manson. There were parts during the fighting scene and some of the conversation that I feel she excelled at. She look strong when they let her, especially when she fought the first demon on the ship. Held her own and looked like a credible threat. Felt like the writing failed her more then Amy did. Who did the best she could and was at least enjoyable to watch.

This is not B-Movie Sunday, which means that this is getting an official grade, and that is a D plus. Can’t possibly give this a higher grade. Would be lower, but Amy Manson was able to shine enough when they let her and did like what the demons look like. Can’t even really suggest it to anyone. If you love ther Doom series, don’t watch this, you will probably have a bad time. If you like bad B – movies. You might have a bit of fun, with some friends and beers, but there are far better ones to go with then this. It’s a really shame, because there was a good story here, but writing and direction blew it big time.

Thank you for reading